In World War II in the Philippines, the occupying Japanese government issued fiat currency in several denominations; this is known as the Japanese government-issued Philippine fiat peso. The Japanese-sponsored Second Philippine Republic under Jose P. Laurel outlawed possession of guerrilla currency, and declared a monopoly on the issuance of money, so that anyone found to possess guerrilla notes could be arrested.

Some Filipinos called the fiat peso "Mickey Mouse money". Many survivors of the war tell stories of going to the market laden with suitcases or "Bayong" (native bags made of woven coconut or buri leaf strips) overflowing with the Japanese-issued bills. According to one witness, 75 "Mickey Mouse" pesos, or about 35 U.S. dollars at that time, could buy one chicken egg. In 1944, a box of matches cost more than 100 Mickey Mouse pesos.

Those bills were often used by American psychological warfare personnel as propaganda leaflets. The Japanese occupation banknotes were overprinted with the words "The Co-prosperity Sphere: What is it worth?", in an attempt to discredit the Greater East Asia Co-Prosperity Sphere, and dropped from Allied aircraft over the occupied territories.

The JIM notes are usually worth ten to twenty five cents each, unless they are in perfect condition, then fifty cents to a dollar. If they are the replacement type, they could be worth a couple of dollars to even five dollars.

In August 1940, Japanese Prime Minister Matsuoka Yôsuke announced the idea of the Greater East Asia Co-Prosperity Sphere, a group of Asian nations led by the Japanese and free of Western powers; "Asia for Asians". As Japan occupied various Asian countries, they set up governments with local leaders who proclaimed independence from the Western powers. One of the main ways to accomplish this was to have a unified currency, one that was not tied to western currencies.

Once the Japanese government made these notes, their military confiscated all hardcurrency in the Philippines, both from the government and the people. They replaced it with Southern Development Bank notes.

Now for an explanation of the method the Japanese used for adding serial numbers to most of these issues. They first used what are known as "Block Letters", printed in red on the face of the note. This system has the first letter denoting the location issued: therefore, the Philippines had block letters which started with P. So for example, the Philippine notes would have on the front depending on when printed, a set of letters in red: PA, PB, PC all the way through PZ. These are known as "Whole Block Letters".

When PZ was reached, one of two things happened- for the one through fifty centavos notes, it was decided to use what is called "Fractional Block Letters". These were basically a fraction, but instead of numbers, it was letters, appearing like this: P/AA and this system worked in the same principal as before. The letter on top denoted the location, and the bottom two were the series, starting with AA and progressing as needed. When AZ was reached, it was advanced to BA and went through BZ, and on some issues, CA and so on to EZ. For the Pesos notes, serial numbering was introduced (as well as a design change).

Some denominations have letters skipped over. The reason for this is not known, but it is believed that so many of these notes were printed, they may not have been discovered yet. Even today, bundles of Japanese Invasion Money are being discovered under old huts, in tunnels and stuffed into caves.

After the liberation of the Philippines, the Red Cross came in to help out. They obtained many of these JIM notes, and punched 2 holes in each one. Then these hole-punched notes were distributed to the soldiers as souvenirs. These notes have no extra monetary value, but do come with a bit more of a story and can usually be found in high grades.

Regarding the legality of the JIM notes after the war, President Truman did not support the stance of the Philippine government. Commonwealth House Bill No. 647 (Senate Bill No. 51), titled "An Act Governing the Payment of Monetary Obligations Incurred or Contracted Prior to and During the Japanese Invasion of the Philippines and for Other Purposes," was passed by both houses of the Philippine Commonwealth Congress on the last day of its last session, December 20, 1945. It was signed into law by President Osmeña on January 18, 1946. The law provided for the validation of payments made in Japanese "mickey mouse" money during the period of enemy occupation. 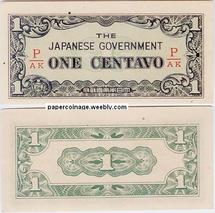 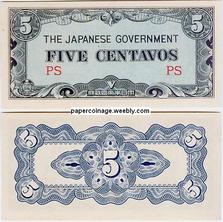 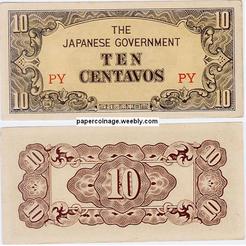 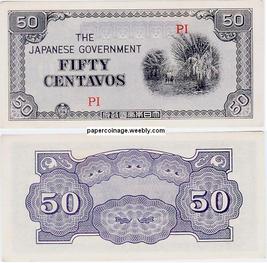 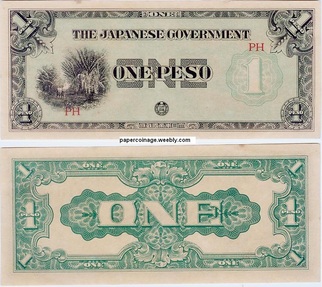 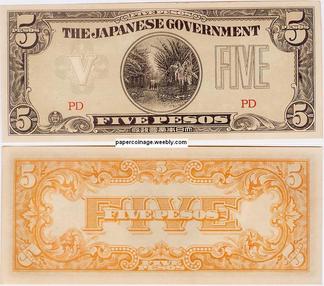 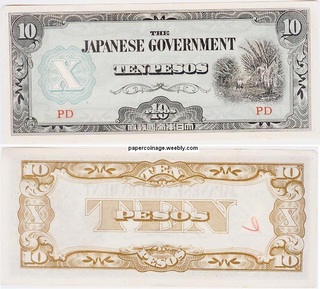 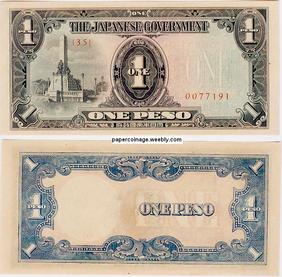 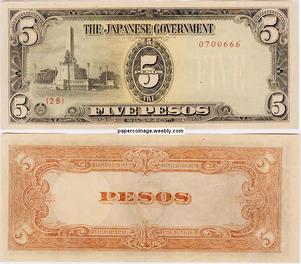 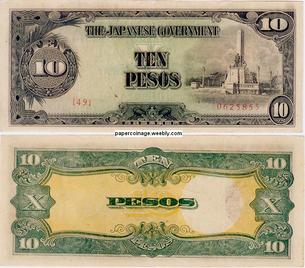 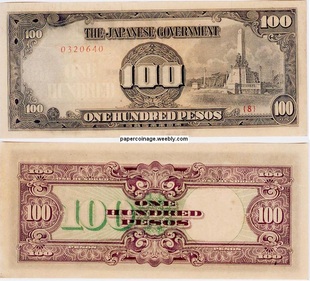 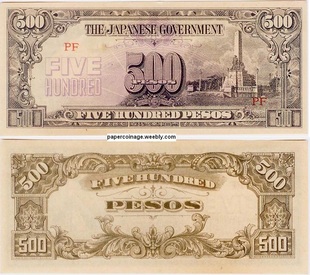 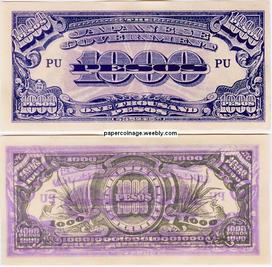 Ovpt. Varieties:
THE CO-PROSPERITY: WHAT IS IT WORTH?

a. The Filipino organization called JAPWANCAP, Inc., (Japanese War Notes Claimants Association of the Philippines) made a very serious attempt in 1967 to obtain funds from the United States for redemption of millions of pesos in Japanese occupation currency. Notes being held by that group were marked with a number of different stampings. Most are seen on higher denomination notes, but occasionally lower values are found thus marked as well, Such marked notes have no particular value the pieces.

B. Various Japanese occupation notes exist with propaganda ovpt: THE CO-PROSPERITY SPHERE: WHAT IS IT WORTH? Also, many copies of the ovpt. have been applied to the otherwise common occupation notes. It is extremely difficult to ascertain genuine ovpt. at this time. 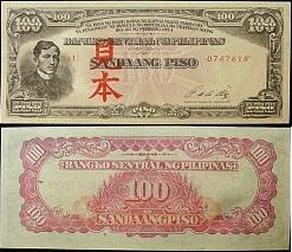