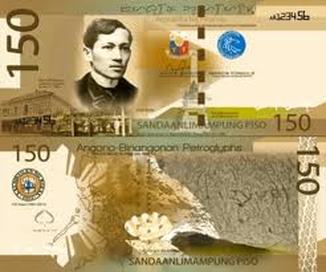 The Bangko Sentral ng Pilipinas on Wednesday (Feb. 08, 2012)  warned consumers and netizens of “fictitious” images of a P150 banknote purportedly to commemorate the 150th anniversary of national hero Jose Rizal.

In a statement issued to news media, the Bangko Sentral said it has “never issued nor is planning to issue such type of banknote. Therefore, any 150-Piso commemorative note or similar banknote is fictitious.”

The TV News Online’s web search yielded at least three blogs that posted images of the “proposed P150 banknote” the front side of which bears a black and white photograph of Rizal and the logo of the BSP and the seal of the Philippine government. On the reverse side is a depiction of the Angono-Binangonan Petroglyphs. The image of a supposedly P150 banknote circulating on the Internet. No BSP meeting on such banknote.
The Rizal banknote images have also spread through Facebook via various posts.
TV News Online’s web search also yielded two images of a design for a
P15 bill depicting another Filipino hero, Lapu-Lapu. These images bear the logo of the BSP and seal of the Philippine government.
In a post, Facebook user “Pinoy Numismatist Network” claimed
the P150 banknote "is not a hoax or fake. That 150 Rizal bill was an actual design proposal submitted by TBI to BSP early in 2011, but wasn’t approved."
“Eventually, we ended up with a medal and a “1-piso Rizal commemorative coin.” No actual paper money were made, only an image which made viral through the net,” Pinoy Numismatist Network also claimed.


While the central bank received letters proposing a banknote to mark the Rizal birth anniversary, no design was ever taken up in any meeting of the BSP, an official of the Bangko Sentral Security Plant Complex in Quezon City told TV News Online. 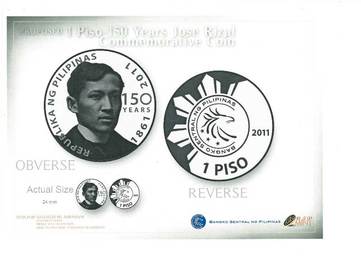